If only James Bond were my dad

We made it to the mountain top!

The latest outing of the Dads’ Bucket List involved 16 of us taking our first trip out-of-state to do some skiing and other winter activities in Cataloochee, NC. When you visualize pulling into a ski resort, I’m sure like me, you picture a James Bond type scenario where he pulls into a quaint Austrian ski town at the base of the Alps driving his Aston Martin with the latest ski gear sitting on his trunk rack as he flips his key to the hotel valet and then heads off to save the world in the oh so coolest of ways. Not sure we pulled off the same entrance. You see, we suburban dads rolled in with our fleet of Loser Cruisers (a.k.a. Minivans) in just about every make, model and color and rather than flipping our keys to the valet at some swanky resort we had the kids piling out of the cars in a gravel covered parking lot ringed with hay bales so they could race over to check in at the first stop on our itinerary – Tubing World. 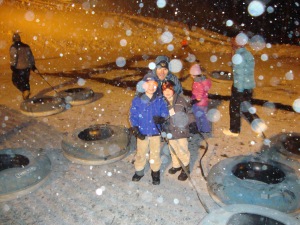 General George and a couple of his loyal soldiers

Now, kind of like an international spy agency, we also sent in our advance team to scout things out for us.  Jersey Tony and his two boys (Jack & William) arrived before the rest of the caravan and secured the intel we would need for a Friday evening tubing session. Everybody else showed up right on time so we could make our 6pm tee time (is that what you call it in tubing parlance?). Well, almost everybody that is because Magic Mike McIntosh took a wrong turn (or “planned reconnaissance” as he called it) that cost him 45 minutes of prime tubing time. He later admitted that the arrival was also delayed due to having to stop and buy hats and gloves for his kids because honestly who would have thought you’d need those items when you’re heading out for a ski weekend. The tubing was a big hit and all but one member of our party (yours truly who was looking for sympathy for a still healing broken hand) took part.

Living the high life: bar stools and their own table

After tubing, we did a quick check-in at the hotel and then met up with our advance team (Jersey Tony and his two lieutenants) at the local sports bar next door. Despite the fact that the outside hadn’t changed its decor since the 70s (see painting of Terry Bradshaw slinging it on the side wall) the inside had all the trappings of modern progress (big screen TVs, auto flush commodes and plenty of cold beer). The kids were pumped because they got to sit on bar stools and have their own table. The dads were pumped because they got to sit on bar stools and have their own table. Everything was right in the world (if you’re a mom reading this go ahead and skip down to the next paragraph). For the rest, I’ll continue. We finished up around 9pm (two and 1/2 hours later than Special K and Philly Mac had committed to their wives in written contracts to having their sons tucked into bed) and decided it wasn’t quite time to call it a day. It was “bath time” we all agreed we’d tell our wives and so we went back to our rooms got the kids in their swim suits and took them for a dip in the heated pool. They had a blast and we got them to bed just before 2 a.m. 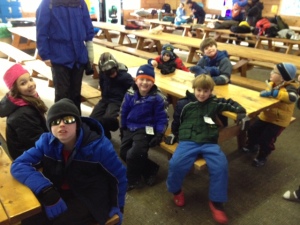 The calm before the storm

The next morning our group leader for the trip, General George Markley, had us all report to the mess hall for breakfast before heading out the door “no later than 7:45 so we can be in our gear and on the lifts no later than 9am, ya Humps!”. Dude wasn’t kidding so we rolled out right as planned about 8:15. I won’t take you through the details of all the logistics, but by the time we were all where we were supposed to be it was about 10:15 so we were just a little bit behind the General’s schedule. We sent the 3 youngest to ski school and the other kids went to group lessons. We had a few dads stick around to oversee the group lessons while some of us went out for a couple runs. By the time we got back to relieve the other dads, a couple of cracks in the group’s armor began to appear. The best way to put it is that General George received some bad intel on the group lesson. Our kids had a Sergeant Hulka from Stripes wannabe as their instructor. He kept telling the dads stuff like, “they really shouldn’t be in this group lesson” and we dads responded with the nod that indicated our response was “yeah, we get it, Sarge. Now, shut your fly trap and keep teaching ’em because we came here to ski dammit and that’s exactly what our little crying angels are gonna do!” 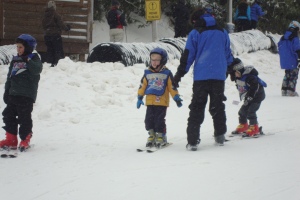 Eddie the Eagle ready for takeoff

The first surrender in our group came at approximately 11a.m. (that’s roughly 45 minutes for those keeping score) when Magic Mike turned in his kids’ boots, skis and poles and settled into the lodge for, well, let’s call it brunch because it wasn’t even quite lunchtime yet. Over the next couple hours, the other dads started folding and joined the growing group indoors. This included yours truly, who was forced to pick up my own little “Eddie the Eagle” (Bo) who was taken back to the ski school building when his instructor just couldn’t take anymore (I knew what the guy had been through so I greased him with a couple of twenties to try to smooth things over, but I think the only thing that may have truly satisfied the guy for what he’d endured would have been me signing over the deed to my house). Some of the kids, including William and Blake, got pretty into it and were taking the big lift up for some runs. Others that struggled early made progress as their dads stepped up to coach them on the ski school hill. 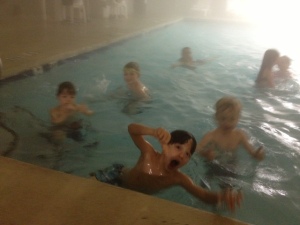 The day ended a little earlier than I had thought it would and we all loaded up the cars to head back home. But before we were officially on the road, the kids talked us (or rather nagged us into submission) into stopping back at the hotel for another swim and one last dip in the hot tub (guess they do know how this skiing thing is supposed to work). That gave the dads a chance to unwind with some laughs about the chaos that had taken place on the mountain as well as discuss some business (turns out General George is a tax accountant and he’s devised a strategy to write the whole weekend off. Something about claiming it was a humanitarian mission to help the victims of flooding in Latveria. Sounds sketchy, but he claims it’s “bulletproof.”).

Once we were officially on the road, I kept thinking about how to categorize the day and the only word I could come up with was “DISASTER”. I got a call on my cell phone from Special K about then and his exact words were, “It was great. It went a lot better than I expected.” Talk about setting the bar low. This from a guy that was on the road home by 1:30pm. I hung up and laughed hard as I told General George what he had said. George agreed with Special K and said he had “a blast.” Since then more calls, texts and e-mails came in like Magic Mike’s that read “we really did have a good time. It was fun to hang out with you guys and your kids were all great. Good memories.”

The group minus our 3 member advance team

I grew up in Colorado and skied a lot with my family. By the time I was the age of our kids I was skiing all over the mountain. Our days started early and ended when the lifts shut down and so I thought that maximizing the day was what it was supposed to be like for my kids and our group. As you’ve read, on this outing things didn’t come easy like they do for characters like James Bond. But after hearing back from the other dads, I realized I was the only one that was thinking it was a failure and upon further reflection I quickly changed my opinion about the events of the weekend. The reality was we laughed a lot. We experienced a lot. We learned a lot. And at the end of the day, that may be one of the most important things we can do on this important, meaningful journey of fatherhood.  Go. See. Be. Do.

Husband and dad to two boys who's always trying to enjoy the humor and meaning in the journey of fatherhood. Check out how things are going at: http://dadsbucketlist.com In addition to these responsibilities I'm also an avid (some would say obsessive) sports fan, very amateur gardener, aging but still active runner, and an always willing to experience a new country traveler.
View all posts by Matt Boettcher - Dads' Bucket List →
This entry was posted in Experiences and tagged 007, Aston Martin, bucket list, Cataloochee, dad, Dunwoody, Eddie the Eagle, GA, James Bond, Latveria, olympics, Sergeant Hulka, Ski resort, Skiing, Sports, Terry Bradshaw. Bookmark the permalink.

2 Responses to If only James Bond were my dad