“Just wait until you have kids one day” 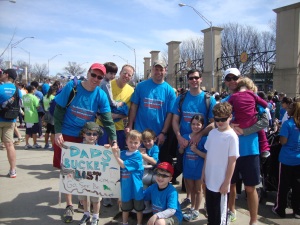 I’m sure many of you had parents that uttered the line “just wait until you have kids one day and then you’ll understand”.  I seem to remember hearing it a lot and I never really understood what it meant. For example, when I was a kid and refused to eat my vegetables I wasn’t allowed to leave the kitchen table. So, being just a little bit stubborn I’d set my mind to waiting them out.  The family would leave and go to the TV room to relax and take in what sounded like the greatest program ever to be broadcast. I’d be left sitting there just me and my uneaten vegetables. A lot of times the lights were turned off on me, but that wouldn’t matter because I was going to win this battle. And ultimately I would, as my mom would tell me to excuse myself from the table and bring my plate to the sink – vegetables fully intact. It was then that I recall hearing that “just wait until you have kids” line.

“I’ll play games but I won’t eat my vegetables”

Well, fast forward 35+ years and it’s coming full circle. Getting my boys to eat vegetables is a battle I’m losing – handily, thank you. My 5-year-old, Bo, takes it to a whole other level though. We matched wits recently in an epic battle over celery. I put cream cheese on it  thinking there’s no possible way he couldn’t eat it. He resisted, and I insisted it be digested. He was left alone to eat it while we went upstairs. A couple minutes later we heard him call, “mommy, I need you to come downstairs”. When my wife said she was busy and he needed to come up, he said she had to come down and so she finally did. The reason she had to come down? Oh, he’d eaten the celery all right just like dad required. And then, in a genius twist of the “I’ll show you” game, he’d let it all come back up on the family room carpet. “Just wait until you have kids some day, Matt…”

And so it’s fitting after that introduction that we get to our latest Dads’ Bucket List outing to support people who wouldn’t think about refusing my celery and cream cheese combination.  Our posse of 16 took part in the 2013 Atlanta Hunger Run/Walk to raise money for hunger programs throughout the city. We gathered on a glorious 70+ degree day in one of the Turner Field parking lots where they had all kinds of activities for the kids to do before the big race. I’d told all the dads to call my cell and I’d let them know where to find me once they arrived, but that made it sound easier than it was. They’d call me say when we were at the Arby’s exhibit where the kids were using the sledge hammer to try to ring the bell, but by the time they’d show up there we were off to one of the inflatables where the kids were trying to win a relay race.  This moveable feast (like the food reference?) played out for every dad that tried to find the group.  Fortunately, shortly before the race kicked off we managed to get everybody together and make it to the starting line.

Why run when you can play a game of tag?

Once we were there it got a little chaotic and not because of the huge crowd of 10,000+ people. Special K (aka Kevin Watts) and Magic Mike McIntosh apparently were talking about what they’d been doing to gear up for this HUGE 3.1 mile run. Mike told about how he’d been waking up at 5am for the last 4 weeks and doing gassers at the high school track. Not to be outdone, Special K told about how he’d been doing his P90x regimen and in the strangest twist to one-upsmanship I’ve ever seen the dude whips his shirt off to show the fruits (food reference) of his labor. He starts flexing and yelling out “welcome to the gun show.” (Thank God the Dads’ Bucket List shirts haven’t come in yet because we disowned him on the spot). Mercifully, we talked him into getting his shirt back on just as the run got underway.  It was also at that point that Bo told me he was tired and asked if I’d carry him (pic from AJC to prove it). I should have known this might happen when earlier that morning he asked, “daddy, if we get tired during the Hunger Run can we take the bus?”  I’m a sucker and obliged the opportunity to carry the little tart.

Like a lot of other Dads’ Bucket List outings, we couldn’t seem to stay together. Competitive Dave Rickell was hell bent on winning the thing and set the pace at the front of the pack with his younger son, Eli.  Calm and steady Grant Campbell waited for the crowds to spread out so that he could run while pushing his daughter, Mary Grant, as she hung out in the jogger (talk about living the leisure life of Riley).  And then there was me and Magic Mike who let our kids talk us into avoiding the turnaround loop by taking a 20-minute break to play a game of tag.  That allowed us to bring up the rear of the pack and an earlier than expected end to our Hunger Walk.  You see we cut off the last couple of hundred yards and made the savvy exit to the parking lot where post-race beverages were waiting in a cooler at my car.

The starting line chaos made some lose their minds

We filled the kids up with juice boxes and girl scout cookies and they set off into a competitive game of finding old bottle caps around the picnic area (who knew such a pursuit existed). That allowed us dads to enjoy a cold one and slap each other on the back for a job well done in finishing the run and raising over $400 for the hunger cause.  It also allowed us to catch up on each other’s lives a little bit. As usually happens, the conversation covers lots of ground but always comes back around to the latest happenings with our kids and families.  One dad talked about how he’s struggling a little bit trying to figure out what interests his son really has beyond the video game console.  I wanted to offer some silver bullet answer to a question I could tell was bothering him and honestly probably puzzles most of us at times.  It led me to thinking about what Graham Greene wrote, “There is always a moment in childhood when the door opens and lets the future in.” That kind of serves as an unofficial theme for our group as we engage them in meeting new people and sharing new experiences that may spark some interests and passions.

The conversation also took me back to that line about “just wait until you have kids one day…” Slowly but surely I think I’m starting to get its meaning.  To me, it means we want only the best for them.  Often times, we think we know what it is.  In the end though they’ve got to find it for themselves.  We can’t force it on them any more than we can force them to eat food they don’t like.  But more than anything, it means we love them unconditionally.  Even when they won’t eat their vegetables.

Husband and dad to two boys who's always trying to enjoy the humor and meaning in the journey of fatherhood. Check out how things are going at: http://dadsbucketlist.com In addition to these responsibilities I'm also an avid (some would say obsessive) sports fan, very amateur gardener, aging but still active runner, and an always willing to experience a new country traveler.
View all posts by Matt Boettcher - Dads' Bucket List →
This entry was posted in Experiences and tagged Arby, Atlanta Community Food Bank, Atlanta Hunger Run/Walk 2013, bucket list, Dave Rickell, Family, Graham Greene, Parent, Television, Turner Field, Vegetable. Bookmark the permalink.

8 Responses to “Just wait until you have kids one day”