We put a wrap on another school year last week and (big exhale) despite some cracks in their academic armor all indications are that my boys will matriculate to 1st and 3rd grades.

The end of the year brought some class celebrations and I was able to attend one for Blake’s 2nd Grade class.  His teacher, Mrs. Mach, read a short essay that each child wrote about what they want to be when they grow up.

There were a couple who will be President (no doubt), some who will be singers, athletes, fashion icons and even a dentist (for the record, that one seemed the most realistic).

Blake’s story was about how he hopes to be a professional hockey player.  He wrote about playing for Team USA and also hoisting the Stanley Cup one day.

I got choked up a little where he wrote that he likes hockey because his dad inspires him to play.  He talked about how he enjoys when I coach his team (even though I get mad at him sometimes).  That part caused me to squirm because admittedly, he’s right.

There was something about his essay that really struck me though.  He doesn’t love hockey.  In fact, I’m not really sure he likes it any more than the other sports he plays.  Although I wish I was wrong, I know I’m right.

You see, when he’s away from the rink he’s not always playing in the driveway.  In fact, it’s pretty rare that he puts the goals I made to use.  When it’s nasty outside, he’s not using the area I cleared out in our storage room to perfect his shot.  He’s not searching the Internet for the latest gear or watching highlights of the sport’s biggest stars.

He’s just not that into it.  And guess what?  I’m totally okay with it.

I think his writing project was what’s referred to as a ‘dog whistle’.  That’s to say it was coded language meant for me.  What I heard was, “Dad, being around you helps shape the grown-up that I’ll become.” 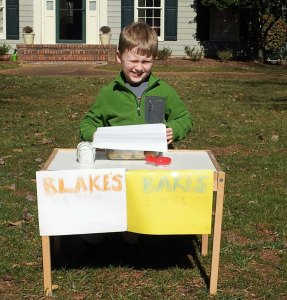 Helping to Shape the Grown-Up He Will Become

It said this by saying, “my dad loves hockey and when I play hockey I get to develop my physical abilities. I also learn other life skills like how to be a valued member of a team.  I get to hang out with him and receive his praise (and occasionally his ire).  It’s a win-win for us.”

I know the days of wanting to hang out with me won’t last, but I’ll take them while I can get them.

Kids are pretty smart about how they communicate messages to us.  Sometimes they’re direct. Other times, as with Blake’s essay, they’re more subtle, like a dog whistle.  I’m going to try to keep my eyes and ears more attuned to receiving and decoding these covert messages.  I hope you will too.

Keep up with us by visiting http://www.dadsbucketlist.com

Husband and dad to two boys who's always trying to enjoy the humor and meaning in the journey of fatherhood. Check out how things are going at: http://dadsbucketlist.com In addition to these responsibilities I'm also an avid (some would say obsessive) sports fan, very amateur gardener, aging but still active runner, and an always willing to experience a new country traveler.
View all posts by Matt Boettcher - Dads' Bucket List →
This entry was posted in Blog, Experiences and tagged bucket list, Dads' Bucket List, dog whistle effect, hockey, Humor, Parenting. Bookmark the permalink.