“Who Ate My Twinkie?” 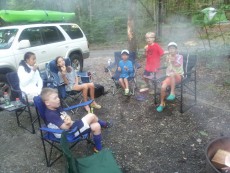 “Who brought the food?”

It’s probably a generational thing my kids wouldn’t get, but Gilligan’s Island was classic after-school TV for me.

I liked that in spite of their situation the castaways carved out a pretty good life for themselves.  I mean the Professor was able to invent a washing machine and even jet pack fuel at one point.

Making the most out of what you have was part of the theme of the latest outing of the Dads’ Bucket List crew.  We endeavored to take our young charges out for a little boating or as I referred to it, our “3 hour cruise”.  We’d follow that with some time in the wilderness. You know, what some people refer to as…camping.

Similar to the TV show, within an hour of departure it became clear we were under-provisioned and slightly unprepared. At our first pit stop for gas, Special K looks at me and says, “what are we going to eat?”. 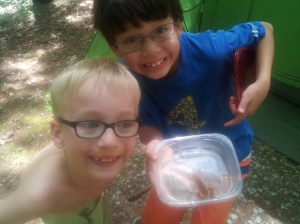 When I told him I packed for my kids, he added, “what about everybody else?”. At that point, we convened everybody and had a lesson about what it means to share. As in, now you’re only going to get about 1/4 of your recommended daily calories.

But hey, this provisioning miscommunication is part of what makes Dads’ Bucket List so great. We figure out ways to adapt and overcome.

This couldn’t have been demonstrated any clearer than when upon arrival our kids immediately started pulling crawdads out of the nearby stream and dubbed them “dinner”.

Shortly after that, we learned about another obstacle or obstacles we’d have to overcome.

That’s right, what says, or rather screams camping than multiple neighboring campsites reporting bear sightings the night before? One account included a bear climbing on a car roof in search of food.

On the plus side, these stories eliminated push-back from our troops about going to bed. “Dad, do bears eat people?”

“Only ones named Bo that don’t stop talking.”

Morning came early and luckily all members were accounted for.  Just like the TV castaways, we too had survived.

The ride home provided plenty of time for the troops to put together a list of what we should bring next time. I guess the fact they want there to be “a next time” means we didn’t entirely miss the mark.

Now, if only I could figure out how to get that bear off the roof of my car before we get home…

What’s up next? Another new experience!

Husband and dad to two boys who's always trying to enjoy the humor and meaning in the journey of fatherhood. Check out how things are going at: http://dadsbucketlist.com In addition to these responsibilities I'm also an avid (some would say obsessive) sports fan, very amateur gardener, aging but still active runner, and an always willing to experience a new country traveler.
View all posts by Matt Boettcher - Dads' Bucket List →
This entry was posted in Blog, Experiences and tagged boating, bucket list, camping, Humor, Parenting. Bookmark the permalink.