“Is That Drone Following Me?”

While I headed home from the gym the other night, my two boys sat in the back seat enjoying soft drinks.  Apparently, my oldest decided to ask himself, what happens if I poke a hole in the bottom of this styrofoam cup and leave the remaining sticky liquid in dad’s car overnight?

“Is that drone weaponized, dad?”

Kids tend to have an innate curiosity.  As it relates to making holes in half-filled cups, I really don’t understand much of it.

This sense of curiosity is one of the things that drives us to try new experiences with Dads’ Bucket List.  And so it was, that we thought we’d explore a subject many of us want to learn more about – drones!

That’s right, we decided to take our kids for a weekend jaunt to Afghanistan so we could get up close and personal with the latest in military drone technology.

Seriously, we stayed a little closer to home and headed up to the Georgia Model Aviators airstrip in Ball Ground, GA.  It’s this great space carved out of 66 acres of land with an 800 ft. paved runway, all maintained by 260+ hobbyist members. 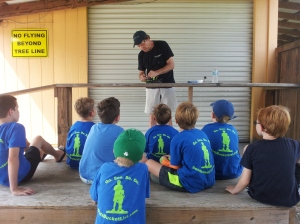 I heard that with both ears: “Study hard especially in math and science so you can get good jobs some day.”

We were greeted by David Roberts, who took the time to give our group a briefing on the history of the GMA and background on the type of drones and other model aircraft that fly there.

He won the dads over early when he talked to our kids about the importance of studying hard in science and math so they could earn good paying jobs (and get off Mom & Dad’s payroll).

That led to dads doing net present value payback calculations on how much exactly those jobs would need to pay.  Those figures led to dads passing around a community bottle of Advil for the headaches we developed.

“Dad, can we get one of these for Christmas!”

Back on the tarmac, David lined up our crew to see some of these drones in flight.  We watched him take off, fly and land them by looking into a viewer that allows him to see through the drone’s camera as it flies.  Whoever comes up with this technology is one smart, cool dude.

He was nice to let our kids try out his iPad flight app right up until my younger son was curious to see if orange Cheetoh fingers leave a mark.  For the record, they do.

We closed the outing with dads peppering David about costs and specs so we knew exactly how much to budget for our holiday shopping lists.  It appears the holidays are shaping up to be expensive again.

This isn’t your dad’s Viewmaster from the ’70s.

So, at this point you’re probably asking whatever happened to that styrofoam cup left in my car?  Well, let’s just say my son got to practice his janitorial techniques before heading to school.

Something tells me it won’t be the last time a test goes awry, but I hope he learned from it.

I hope he also learned something from our outing such as how science and technology get put into everyday applications like getting an aircraft to fly.

“Will Cheetohs leave a streak?”

Who knows, maybe it’ll spark his interest and even lead to a job that gets him off the family payroll one day.  Or better yet, maybe it just leads to a new hobby.  Something he can enjoy with his dad.  For many years to come.

Husband and dad to two boys who's always trying to enjoy the humor and meaning in the journey of fatherhood. Check out how things are going at: http://dadsbucketlist.com In addition to these responsibilities I'm also an avid (some would say obsessive) sports fan, very amateur gardener, aging but still active runner, and an always willing to experience a new country traveler.
View all posts by Matt Boettcher - Dads' Bucket List →
This entry was posted in Experiences and tagged bucket list, drones, Georgia Model Aviators, Humor, Parenting. Bookmark the permalink.

2 Responses to “Is That Drone Following Me?”