The music of Beck, flat bill ball caps, Bill Maher and texting instead of talking are just a few that come to mind.

For whatever reason, it’s tough to nail down what’s going to strike a chord with people.  All you have to do is look at the graveyard of “the next big thing” (think Zima, Ishtar, and the XFL) to see it’s not so easy to predict. 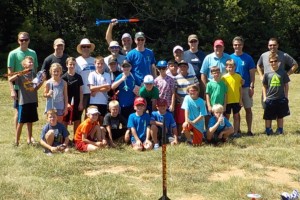 And that’s pretty much the case when planning what’s next for the Dads’ Bucket List crew.  Although, I’ll admit sometimes what gets dads off the sofa really surprises me.

And so it was the case with our latest outing where we intended to get the kiddos outfitted with sunburns and heatstroke as we blasted model rockets way up into the atmosphere on a hot summer day.

We got lots of takers immediately and given that I never did it when I was a kid, I was up for something new.

Good grief that’s some fine craftsmanship blasting up there!

The first order of business after ordering the rockets was to actually build them.  How hard could it be putting together a couple of tubes topped with a rocket cone? Um, let’s just say that on my scale of 1 to 10, it graded out a 12!

The instructions were a hybrid of images inspired by a cubist Picasso and instructions dictated by Yoda. My kids got a lot of earmuff moments over several days of building, disassembly and re-assembly.

On launch day we gathered at the hottest spot we could find on planet earth so we could deliver on our heatstroke agenda item.  Once there, it became launch central as dads and kids set up rockets on pads and began countdowns to launch.

Dads or kids had more fun? You make the call.

It was cool to see how excited everybody got each time one went up.  The kids loved to chase them down as the parachutes deployed and the dads loved seeing their labor wasn’t in vain.

The only problems we encountered were when winds blew some of the rockets into the treetops.  Several dads fought back tears as they saw hours of time drift into the high branches. One dad even drove all the way home only to return with a mishmash recovery tool of two duct taped mop shafts mounted to a golf ball retriever.

Oy vay!  Lucky for the astronauts of Apollo 13 he wasn’t at mission control during their little episode.

We had several people join us at the last minute and lots of onloookers who stopped to check out the action.  Testaments to how popular the idea of spaceflight was with everybody. 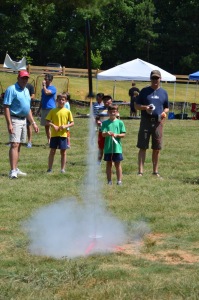 I still contend the simplicity of packing a cooler with your favorite cold beverages on a hot day was the primary selling point.

Whatever it was, we hit a moonshot with this outing.  Even if none of us can explain exactly why.

Husband and dad to two boys who's always trying to enjoy the humor and meaning in the journey of fatherhood. Check out how things are going at: http://dadsbucketlist.com In addition to these responsibilities I'm also an avid (some would say obsessive) sports fan, very amateur gardener, aging but still active runner, and an always willing to experience a new country traveler.
View all posts by Matt Boettcher - Dads' Bucket List →
This entry was posted in Experiences and tagged bucket list, dads, fatherhood, Humor, Parenting, rockets. Bookmark the permalink.