“Now Drop and Give Me Twenty!”

Why lie?  I’ve got writer’s block. Bad. It’s been over a week since our local Dads’ Bucket List crew took our merry caravan to Toccoa so we could attempt to re-enact the training runs of Easy Company that were portrayed in the HBO series “Band of Brothers”. 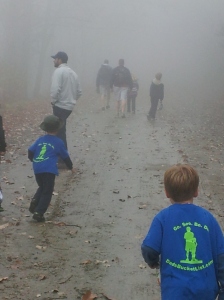 “Easy Company” soldiers they were not, but they gave it a shot.

I have so much regard for the sacrifices that these men and other veterans made that I know I will fall short to try to even begin to capture them in words.

We had a misty, drizzly day that actually provided some realism into the types of conditions that the troops dealt with as they trained.  Upon our arrival, we took time to walk around a small memorial that paid tribute to the thousands of paratroopers that trained at Camp Toccoa before heading to fight in foreign lands.

The casualty counts listed on the granite monuments were a sober reminder of the sacrifices they made. 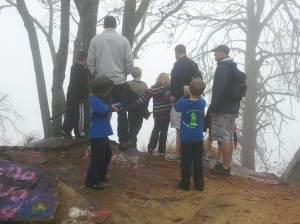 Nearing the top of Mt. Currahee

We made our way up Currahee Mountain by car as we knew that the 3 mile trek to the top in those conditions probably would have led to a couple of our young charges going AWOL.  As we got within a mile of the summit, we parked our cars so we could hike to the top.

The kids tried to see if they could run it, but their efforts were short-lived and they ended up walking most of the way.  The dads stayed back so we could talk details about an upcoming event.

At the top, we were greeted by some large communications towers but couldn’t seem to find any signs or memorials to the military training that took place there. 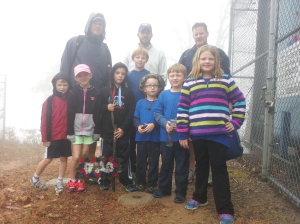 A small red, white and blue tribute to the soldiers that trained on the mountain

After searching for a while, we stumbled upon a small red, white and blue faux flower arrangement that had obviously been left there by another historical admirer.  We took pictures and then made our way back down so we could enjoy our picnic lunch.

I read a comment on Twitter recently where a guy said he felt like he’d done so little with his life after watching a documentary about the life of sportscaster Marty Glickman.

Every time I read a book about our military or watch a movie that tries to capture their honor and heroism, I find myself feeling the same way.

Sacrifices that I feel, yet can’t seem to figure out how to capture in mere words.  To all our veterans, I simply leave you with two heartfelt ones.  Thank you!

If you enjoyed this, keep up with us on our Facebook page at:  facebook.com/DadsBucketList and on our website at Dadsbucketlist.com

Husband and dad to two boys who's always trying to enjoy the humor and meaning in the journey of fatherhood. Check out how things are going at: http://dadsbucketlist.com In addition to these responsibilities I'm also an avid (some would say obsessive) sports fan, very amateur gardener, aging but still active runner, and an always willing to experience a new country traveler.
View all posts by Matt Boettcher - Dads' Bucket List →
This entry was posted in Blog, Experiences and tagged band of brothers, bucket list, currahee, fathers, Humor, Parenting. Bookmark the permalink.